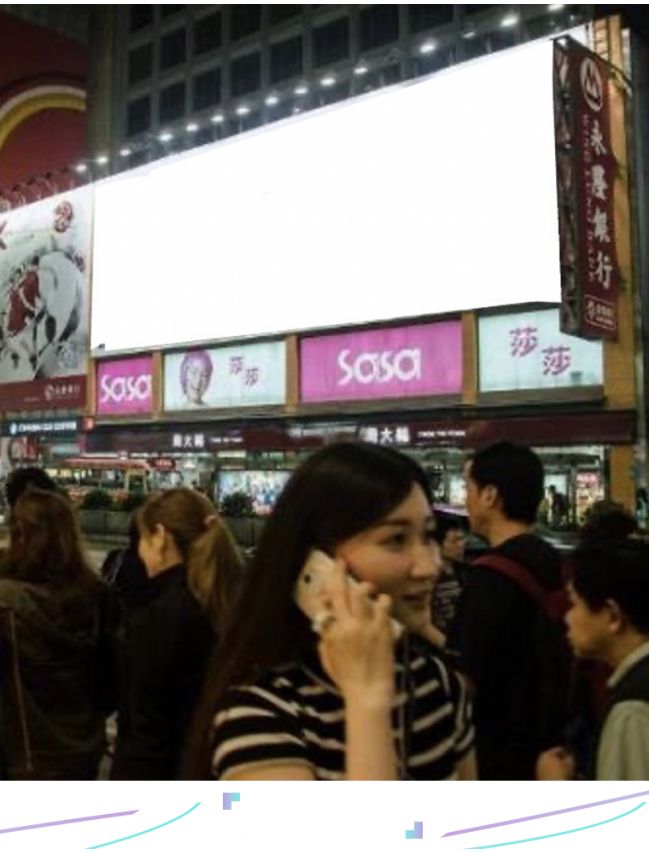 The location of this billboard is at the Bank Centre at 636 Nathan Road, Mongkok. Nathan Road is one of the main roads in Hong Kong, connecting the Yau Tsim Mong district with numerous shops and attractions along the way. The road is always busy prone to traffic jams, especially during peak hours. As the Bank Centre is situated directly next to Mong Kok MTR exit E2, there is a constant flow of pedestrians passing by the billboard. There is an open area by the Bank Centre at MTR exit E2 which is a popular location for buskers to perform on the street, usually attracting lots of people; people taking photos and videos of people busking would also capture your advertisement on the billboard, and when they share the photo or video to their friends or on social media, they would be sharing your advertisement as well.

The average annual daily traffic (AADT) for Nathan Road is around 46,300 vehicles. The pedestrian flow for Nathan Road is estimated to be over 250,000, with quite some pedestrians staying by the billboard for a prolonged period to enjoy the performance. The billboard is one street away from the part time pedestrian street which operates from 12noon to 12 midnight on general holidays, and from 4pm to 12 midnight on Monday to Saturdays.

Allied Plaza Outdoor Advertising Allied Plaza is a shopping mall located at 760 Nathan Road in Mong Kok. The billboard faces the intersection of Nathan Road and Nullah Road, giving it a wider angle for advertising space. The plaza sits next to the Mong Kok MTR station Exit B2 and different bus stations could be found on the sides of Nathan Road, making...
View

Ginza Plaza Outdoor Advertising Ginza Plaza is located at 2A Sai Yeung Choi Street, Mong Kok. Ginza Plaza is a 25-storey building with small retail shops on the lower levels and commercial office space on the higher levels. It is a popular shopping location among teenagers and young adults. Snacks and beverages shops, nail salons and electronic repair...
View

Bank Centre Outdoor Advertising Bank Centre is an office building with spaces for business to rent. It is located at 636 Nathan Road, Mong Kok. The outside of the building is used for advertising spaces, which has three locations for you to choose from. Both sides of the Nathan road have one MTR exit, hence it is a spot pedestrians will definitely be...
View