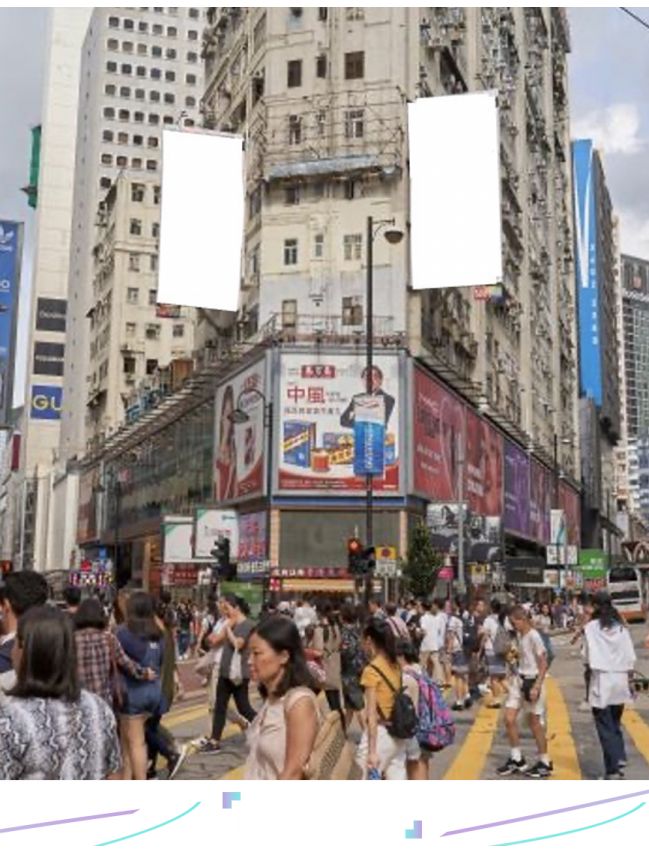 Hong Kong Mansion is a residential building located in one of the busiest areas in Causeway Bay. There are two enormous billboards on the middle levels, one by Yee Wo Street, one of the major streets in Hong Kong, the other by Great George Street, especially the section that acts as a Part-Time Pedestrian Street. Being the main street, Yee Wo Street has a lot of bus stops and a tram station situated on either side of the road, passengers waiting to board the public transport would have a high chance of seeing your advertisement.

Like Yee Wo Street, Great George Street has various stores along the street, attracting people to shop from stores outdoors. Examples like Max Mara, Lush, Etude House and Chanel can all be found beside Hong Kong Mansion. The large billboard hoisted on such an apparent position is bound to draw the attention of people shopping or passing by.

The average annual daily traffic (AADT) for Yee Wo Street is around 30,000, giving it a total of more than 900,000 cars monthly. There is a pedestrian flow of more than 200,000 daily with shopping centres and banking offices surrounding the building.

The Causeway Bay MTR exit E is an exit at Great George Street, people leaving the MTR via this station would be close the advertisement and could see it easily. With the large amount of traffic surrounding Hong Kong Mansion, the billboards undoubted gain a lot of exposure.


Your OOH posters at the best rates on Hong Kong Mansion

Jade & Pearl Plaza is located at 23-36 Paterson Street, Causeway Bay,one of the main passage way between the Victoria Park MTR exit and Hong Kong Central Library. Causeway Bay is a major commercial and economical district in the centre of the Hong Kong Island. It is also well known as a food paradise in Hong Kong. Causeway Bay is surrounded by famous 5...
View
Local