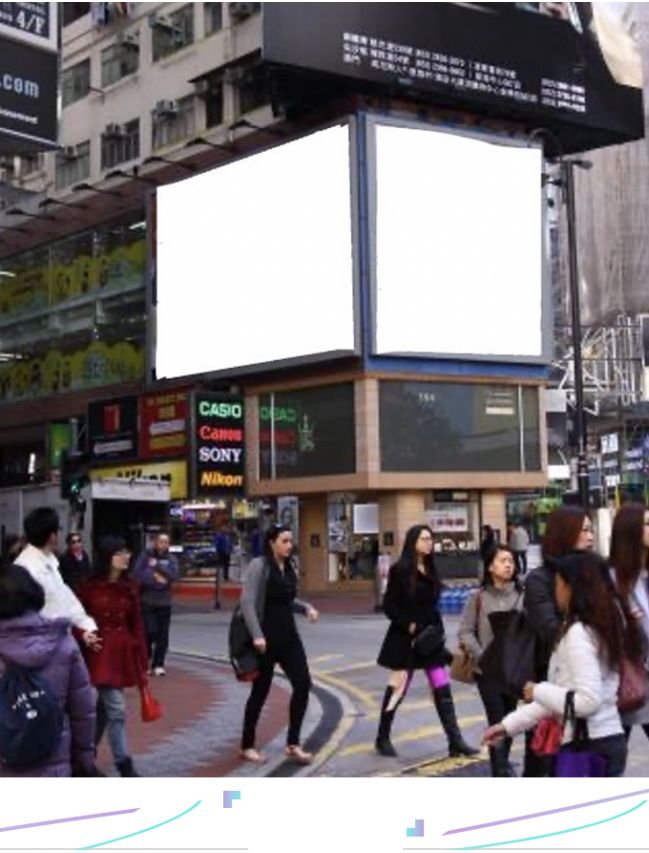 Surroundings of the outdoor billboard advertising in Causeway Place

Causeway Place advertising Billboard is located in Great George Street 2-10, next to Causeway Bay MTR station Exit E. The building is surrounded by three pedestrian streets, with one facing the heavily trafficked road in Hong Kong and the other one in front of the metro exit. Yee Wo Street being one of the busiest streets, the street not only has around 50 different buses and minibuses routes passing by every day but also located with a major pedestrian flow tram station. The driving road is always set as pedestrian zones during festival seasons.

The Causeway Place itself is a 3-floor shopping centre, selling all sorts of products, ranging from beauty cosmetic, famous restaurants to luxurious jewellery. Opposite Causeway Place is the well-known Japanese departmental stores, SOGO.

Statistic around the advertising billboard

With a metro exit just next to it, the Causeway Place billboard has more than 200,000 pedestrians per day. The average annual daily traffic (AADT) for Wo Yee Street is around 30,000, which around 900, 000 car traffic pass by each month.

The human traffic is more than 10 million, showing the great potential to place a billboard advertisement there. For more information about the advertisement, find us a quotation to advertise in Causeway Place.

The size of the billboard 1:

The size of the billboard 2:


Your OOH posters at the best rates on Causeway place

The Goldmark Outdoor Advertising The Goldmark is a mixed-use commercial building in a popular shopping district in Hennessy Road, Causeway Bay. It is located next to Hysan Place and opposite of SOGO, both major shopping centres and landmarks of Causeway Bay; Shoppers would immediately see your advertisement on the billboard once they exit the shopping...
View
Tap to zoom