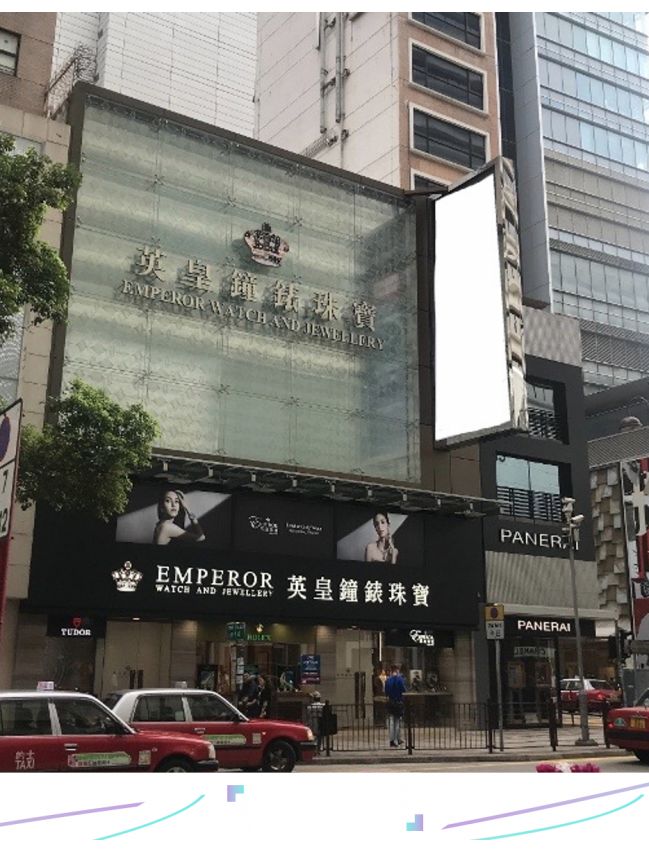 The billboard in Canton Road is located at one of the most affluent areas in Tsim Sha Tsui, surrounded by shopping centres, designer stores and 5-star hotels. It faces Harbour City, a collection of shopping malls next to Victoria Harbour, therefore attracts many passengers boarding ships at Ocean Terminal and Tsim Sha Tsui Star Ferry Pier. Countless high-end stores such as Prada, Giorgio Armani, Givenchy, Fendi or Louis Vuitton attract customers of higher purchasing powering. Apart from modern luxury stores, the 1881 heritage site by Canton Road, old Marine Police Headquarters, is a popular attraction among tourists. Many companies seek office spaces along Canton Road; Above the luxurious shops are high-rise commercial offices with professional working class.

The Daily Traffic Flow of Canton Road is over 40,000 vehicles every day. Furthermore, Canton Road is merely 2 minutes from exit L5 and L6 of the East Tsim Sha Tsui Station, not to mention the large bus terminus at Salisbury Road, the transport can very effectively bring visitors to the busy area. The billboard on Canton Road can bring a high exposure to business executive, foreign visitors, and residents of Tsim Sha Tsui.

Formats of the Billboard:


Your OOH posters at the best rates on Canton Road

The Outdoor Advertisement on Capital Square Capital Square is located at 61-65 Chatham Road South in Tsim Sha Tsui. It is a shopping centre which is near the East Tsim Sha Tsui Station. Various hotels and museums could be found around, it is a place where you can also target tourists as your audience. The billboard is a large horizontal shape, when...
View

Outdoor Advertising in L&D House L&D House is at 2-4 Cameron Road, Tsim Sha Tsui. The building is a place for dining and shops etc. You could also find different shops and restaurants along the street. The location of the billboard is just next to Tsim Sha Tsui MTR station Exit B2, and it is one of the few places that provides huge advertising...
View

Mody Road Lyton Building Outdoor Advertising The localisation of the billboard is at 32-48 Mody Road, Lyton Building in Tsim Sha Tsui. Lyton Building is a residential building with restaurants on the ground level. Being surrounded by hotels and shopping centres, it is often crowded with tourists and is particularly popular among mainland travellers. The...
View
Tap to zoom