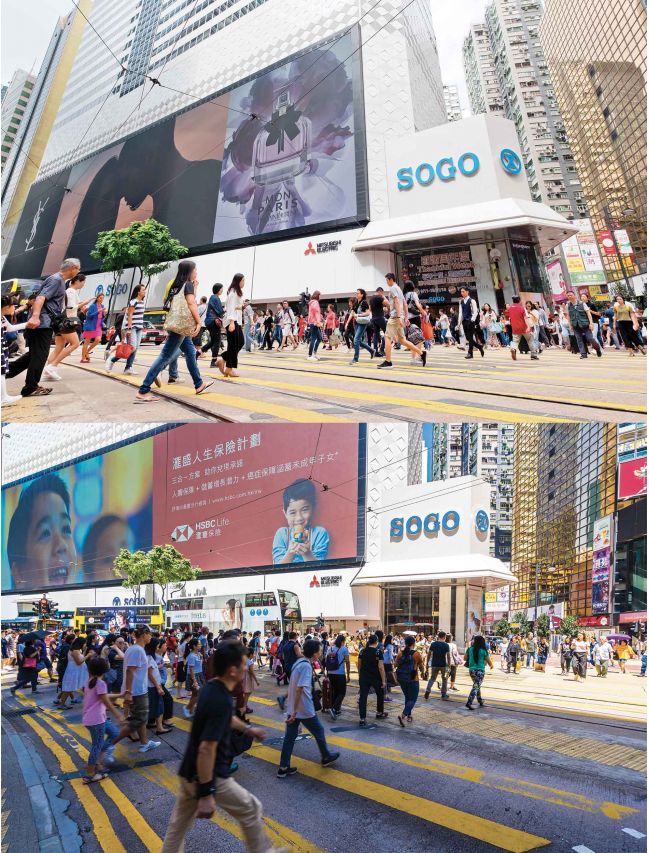 This billboard is Hong Kong’s largest and highest resolution DOOH, with a full HD LED screen located on the exterior wall of one of the biggest department stores in Hong Kong- Sogo. It is a 16-floor department store established in Hong Kong since 1985. They sell a myriad of products, from male and female clothing to furniture and household appliances. It sits within lots of different large shopping areas in the district, such as Jardine’s Bazaar, Times Square, Hysan Place, Fashion Walk and Windsor House.

The enormous billboard faces Hennessey Road, the busiest intersection in Causeway Bay, which allows it to make large impressions on shoppers entering and leaving Sogo, locals, and tourists. It can also be accessed directly by commuters when they exit the MTR station via exit D2, or when their vehicles pass Sogo. Thanks to its geographic location, there is a total of 11.7 million pedestrian and vehicle traffic every month at this billboard.

The HD LED screen can accommodate different types of media and broadcasting advertisements. You can have either static images, or videos with or without audio. You can also advertise on the TV screen with a mix of the above medias, which could help you fit a video that does not fit the size of the screen.


Your OOH posters at the best rates on Sogo Billboard

Surroundings of the outdoor billboard advertising in Causeway Place Causeway Place advertising Billboard is located in Great George Street 2-10, next to Causeway Bay MTR station Exit E. The building is surrounded by three pedestrian streets, with one facing the heavily trafficked road in Hong Kong and the other one in front of the metro exit. Yee Wo...
View

The Goldmark Outdoor Advertising The Goldmark is a mixed-use commercial building in a popular shopping district in Hennessy Road, Causeway Bay. It is located next to Hysan Place and opposite of SOGO, both major shopping centres and landmarks of Causeway Bay; Shoppers would immediately see your advertisement on the billboard once they exit the shopping...
View
Tap to zoom