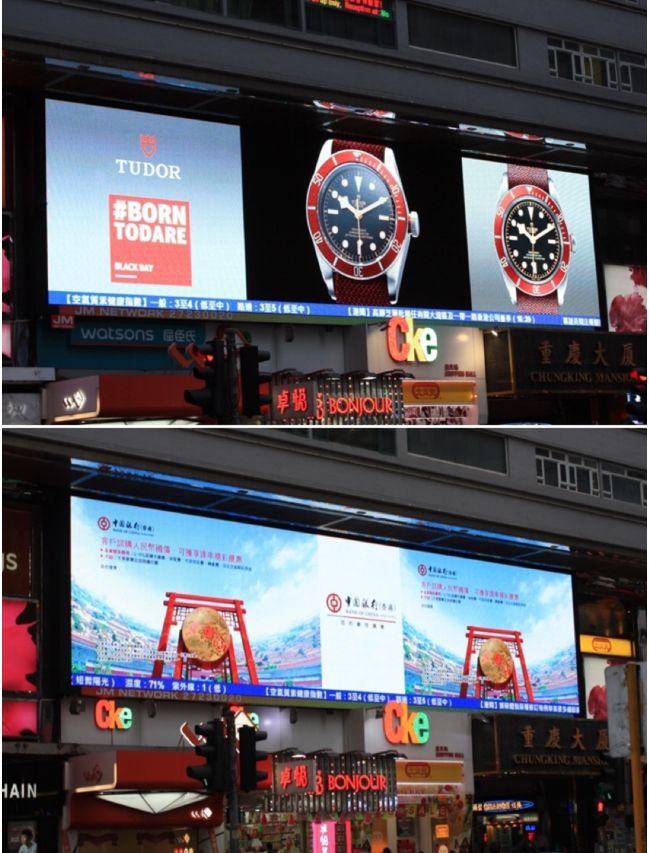 Out of home Weekly B2C

This OOH LED billboard is located at Chungking Mansion, 36-44 Nathan Road, Tsim Sha Tsui. Tsim Sha Tsui is a major tourist district in Hong Kong being directly next to Victoria Harbour, with multiple shopping centres and prestigious hotels around the area. The OOH billboard sits by the entrance of Chungking Mansion, directly facing the traffic light on main street, Nathan Road. It is clearly visible to pedestrians coming to and from the seaside or at the shopping malls. The lengthy LED screen draws in the attention of people on the busy street while displaying video advertisements while people are waiting to cross the road.

As a tourist district, Tsim Sha Tsui acts as an international hub for diverse cultures, Chungking Mansion is especially famous for its authentic food and products from Southeast Asia. The OOH billboard is also in direct sight of MTR exit E and C and iSquare. The building is also surrounded by 5-star hotels such as The Kowloon Hotel, Sheraton HK and The Peninsula, accommodating over 1,150,000 tourists annually. Apart from the many hotels and shopping malls, it also is a pass-by point for scenic spots such as 1881 Heritage, Space Museum, Hong Kong Museum of Art and the Avenue of Stars.

This OOH billboard is the largest LED billboard in Tsim Sha Tsui and targets tourists with high purchasing power. According to surveys conducted, 46% of the respondents were tourists and among the tourists that responded, 90% have purchased fashion, electronics, or cosmetic products while visiting Hong Kong. This shows that most tourists are willing to purchase while visiting Hong Kong and would be persuaded by advertisements if they see products that they are interested in. Since Chungking Mansion is centre to many hotels and shops, your ad could be displayed to tourists daily.

The billboard has an estimated pedestrian flow of 320,000 every day while traffic crossing is directly in front of the entrance of Chungking Mansion, giving people a larger chance at looking at your advertisement instead of passing by. Over an average of 9,600,000 pedestrians were recorded to be at the OOH billboard monthly. Buses passing by on Nathan Street would also be exposed to the ad, especially during rush hours where traffic jams are frequent. There is an average monthly vehicular traffic of over 789,300 by the billboard, resulting over 2,100,000 passengers that would pass by the billboard monthly.

The OOH billboard is located at the street that most people pass through if visitors want to walk towards the harbour from Tsim Sha Tsui, making it constantly a crowded area. Considering both pedestrians and passengers that passes by the OOH billboard, it has over 11,700,000 audiences with the opportunity to see every month. The billboard can undoubtedly maximize the potential of your advertisement and attracts the attention of your target audiences.


Your OOH posters at the best rates on Chungking Mansion