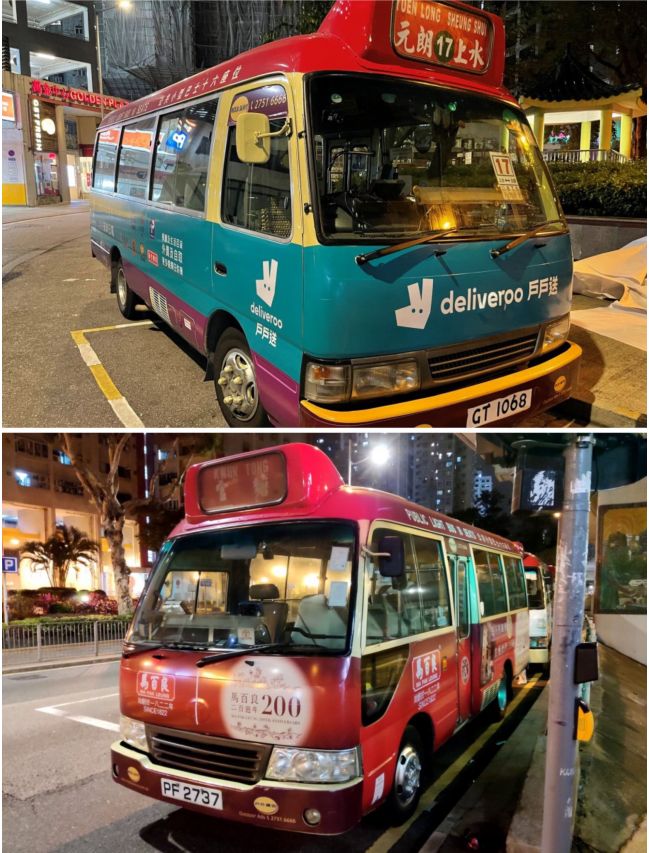 Out of home B2C

Red minibuses in Hong Kong are run by privately owned businesses and are not subject to government regulations as long as they comply with their licensing. Therefore, they determine the routes, headway and fares, making bus stops and departure times of red minibuses more flexible. Red minibuses are also permitted to operate across territories except for restricted zones, so the same minibus could travel across longer distances across territories on the same route. It brings people convenience to travel long distances across Hong Kong. The unrestricted operation time and headway also means red minibuses are almost exclusively responsible to transporting people past midnight, bringing overtime workers and others home no matter what hour it is.

Advertising on minibuses allows you to transform your advertisement into a moving banner, allowing passengers and pedestrians along the street to clearly see your ads. The advertisement would be placed on the whole bus body (area below the window frame; includes front, back, and side panels; bumpers excluded). You can place your advertisement on multiple minibuses at the same time and maximize the exposure of the ad during your campaign; Options ranging from 2-8 minibuses can be chosen in the same package. Minibuses are smaller in size and can travel to areas where other public transports cannot reach, giving minibuses a wider spread across Hong Kong

Target audience of the red minibus advertisements can have a wider range since they can travel across territories. There are total of 977 licensed red minibuses in operation as of December 2021, and they can reach different districts each with their respective education level and backgrounds. You get to choose your desired route and target specific audiences by doing so. Since minibuses are a more affordable form of public transport, the target audiences are generally citizens of all ages from low to mid-level income families. You can also consider late night commuters as your target audience since red minibuses are integral for midnight transportations.

As of December 2021, red minibuses carry 219,000 passengers on average daily. Even though the number of passengers they carry daily is smaller than that of the green minibus, the long distance it travels gives each minibus a longer operation time and a larger coverage. The longest route goes from Percival Street, Causeway Bay all the way to Yuen Long, stopping at a total of 62 stops. This gives the minibus ads an enormous exposure in different districts in one trip.

Red minibus ads have the longest operation hours at 24 hours, meaning that your advertisements will never stop, if there are people passing by your they will definitely be exposed to your ad. Red minibuses are often parked on the street while waiting for the vehicle to fill up, sometimes taking longer if it is not peak hour. Fear not, for it would allow any pedestrians to see your ads clearly even while they are not travelling. Enough to be said, a 24-hour operation time and the wide-spread routes would give your ads an edge in advertising.


Your OOH posters at the best rates on Red Minibus